From Castaways Wiki
Jump to navigation Jump to search

Castaways hub islands are the main spawn area for new players. There are 50 different hub islands going from 0 to 49. On hub islands users are unable to break or place blocks but they are able to do every other task such as fishing, crafting, and using chat features. Hub islands are all the same in appearance. When users first enter castaways they spawn on a provided raft in The Seas next to the main hub island. 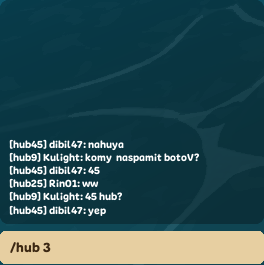 The island features a stage and audience seating in between 2 small huts. Behind the audience seating there is a palm tree garden next to the dock entrance. A Stone cross grave is featured on the right of the docks entrance, the dock extends out as a place for users to leave their raft and access the main island. There is a long bridge connected from the main island to a side island. A small long island with limited terraforming is connected to the bridge.